skip to main | skip to sidebar

What's Not to LOVE About McKinney? 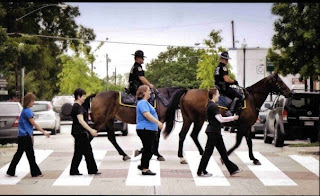 I've just had the most amazing day of my life right here in McKinney.

It started when I was driving my car out onto W. Virginia from my daughter's office, RejuveNation LifeSpa and two police officers on horseback pulled me over into a parking lot. Looking out of my rolled-down window high up to the face of the sweetest looking police officer, and I mean that in oh so many ways, I told him I knew why he pulled me over. Expired registration and expired inspection. Two citations later, they asked me if I had a driver's license because it wasn't coming up on the Texas site. Well...it's still Colorado, not even Steamboat Springs, but Longmont, where I lived another lifetime ago. Hey, listen, my license says it expires in 2012, why do I need another one? I didn't leave the country, just the state. I've lived in Colorado most of my adult life. I've had a Texas license for the two years I drove in Texas and ever since it's been Colorado. Oh lord...

So, after not being hand cuffed or arrested for a felony, which is what bribing a police officer is in this state, I spent my afternoon getting my car legal again in Texas. The people that work here are extraordinary! Lesleigh at the registration place was nice and friendly and just wonderful enough to hug if it weren't for the plate glass that divided us. And then there was Heather at the place I had to go to pay the citations. She apologized for the wait and then let me know she couldn't take care of me today because the tickets hadn't been processed. So, she's going to call me after they are and I'll give her a credit card number so I don't have to come back in! How nice is that???

Let's not forget the guy at FastLane who engineered my inspection. He made sure we were in and out of there so my daughter could get back to do her surgery at 2:15. She's a chiropractor and surgery with a scalpel wasn't on her list to do today, but it sure did hurry up the inspection and I did get her to her office for the next patient.

And then I went to the Department of Public Safety to get my license. When I handed the clerk my driver's license, she was floored that it was a Longmont one. She used to own a shop in Longmont. She told me which one. I told her where it was located because I was one of her customers!!! Right then and there we bonded like long-lost sisters.

And to think, it all started with the mounted patrolmen. They are also the ones in my daughter's photograph that hangs in her spa. These women tried for at least a half hour to just get their rhythm down, and they just couldn't do it. That is, until the two horses and the riders stepped across W. Virginia. It was a proud moment for all.

And even after receiving the tickets, I told the officers to come see my daughter for massages and chiropractic adjustments on the house. This time though my offer was not considered a felony. The citations were already in my hand.
Posted by Unknown at 3:31 PM 1 comment: